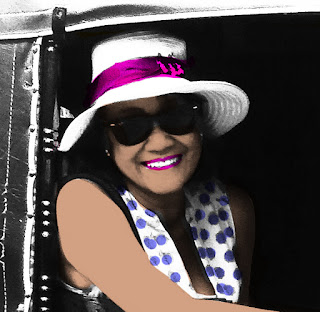 When Louis and I decided that we would go to Kerala for the Ayurvedic experience, I saw ourselves in a quiet, restful haven, being massaged with warm oils once a day, eating delicious vegetarian curries and leaving this Nirvana-type place after 14 days, rejuvenated, restored … just as the brochure promised.
We arrived in Cochin with the sunrise.  A stunning heavenly display of pink slowly turning into shades of  russet and then all at once into a blinding gold.  A perfect backdrop which would set the tone for our 14-day R&R (rest and recreation!).  Or so I thought.
All through the 2-hour trip from the Cochin airport to Thrissur where our Ayurveda hospital was located, I kept hoping that we would not end up in one of those crowded hospital compounds we passed along the road.  But sure enough, we drove into one of them.  Right along highway 69.
Thankfully, the room that was reserved for us was in the last cabin with the garden view.  The room itself was a throwback to the 70s with its shades of brown furniture and furnishings.  (What ever happened to the lighter shades of pale?) Louis and I looked at each other, shrugged our shoulders and agreed to simply enjoy the experience.
Our treatment began as soon as we arrived.  We spoke to the doctor about our ailments.  I had a long list but Louis really had none. He came for me.  To keep me company, give me moral support.  He was never into alternative medicine.  He is your regular skeptic.  Whereas, I have always been a believer of the – nothing to lose, every thing to gain – theory.
By the afternoon, we had our first warm oil massage which certainly erased the vestiges of the long trip as well as the cold winter residue in our bones and our spirit. We took the prescribed hour's rest after the massage and thought … hmmm, we can get used to this!
The following day, we were promptly woken up at 6 AM by a troupe of nurses who gave us our morning cocktail of herbs, the schedule for our treatment along with the timing of all the other medication we would be getting the rest of the day.  This is when we came to the sobering realization that this was not a Spa holiday venue.  It was really a place where people came to be healed.
Day 2 went as scheduled and before dinner we braved the traffic of cars, rickshaws and people and crossed highway 69 to find out what the neighborhood had to offer.  It was not a lot.
After dinner, Louis’ first nosebleed occurred.  The staff came immediately to our aid but it took nearly 20 minutes to stop.  We charged the bleeding to the dry heat and the warm wind that blew all day and night.
The 3rd day, the bleeding came again.  This time with a bit more intensity.  We were asked to report to the emergency room at the general hospital in the compound, but Louis refused, believing that surely his body would eventually acclimatize to the heat and the surroundings. After all, he had lived in Asia for more than 20 years.
On Day 4, the bleeding came just before lunch and it came in big lumps. This time we could no longer refuse the Ayurveda doctor’s order for us to go to the hospital.  Accompanied by 2 nurses, we were rushed by rickshaw to the emergency ward and Louis was immediately laid in one of the beds.  His face was white, his body was cold, his BP was up to 220/110 and the blood was still flowing. The cold packs were no longer sufficient and he was given a blood coagulant to stop the bleeding.  Within an hour, the EENT specialist had found the tear in a vessel in his nose that was causing the bleeding, medicine was placed in the cut and his nose was packed. But he would not let Louis back to our cottage.  He had to remain in the hospital. The nosebleed was not the problem, he assured us.  It was the high blood pressure.
For Louis and I, the problem was every thing.  This was not supposed to happen.  This was my much-awaited holiday.  No family to take care of.  No work commitments.  Pure relaxation and peace after a rather difficult year.
Yet it was not meant to be. During the 3 days of Louis’ hospital confinement, I had to walk back and forth in the scalding heat from the hospital to the shops across the road, then back to the cottage to prepare his meals (vegetarian curry was not doing it for him) on a 1-burner gas stove with whatever utensils I could find.  I had to make sure I was on hand, ready to pay for every bit of  prescribed medication, pick them up from the pharmacy, give them to the nurses so that they could be administered to him.  Unlike the hospitals in Holland, it was a pay-as-you-go kind of arrangement.  In-between I had to take the Ayurvedic treatment that had been designed for me.   In my mind, I kept a mantra going …  you can do this, you will not fall apart.
I did not.  Far away from home, I found support and friendship in Annie, a wise, no-nonsense lawyer from Bombay who shared the cottage with us.  To her, I run for comfort, advise and some real lovely curries!  I was surrounded by true care- givers - from the motherly lady who cleaned our rooms, to the women who lathered us in oils and herbs, to the young, good-looking doctor (!) who supervised our treatment.  To each one of them, we were not the couple in Room 15.  We were Louis and Alma.
Would I go back again?  Yes!
I did not think so shortly after we arrived home.   All I could feel was relief – that Louis was well again, that we were home and close to our kids, that we were back to life as we knew it. 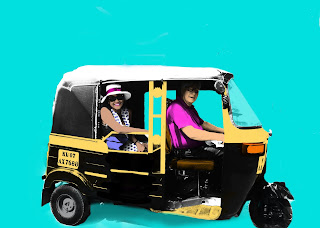 Today, I see things differently.  I look at the foto of  Louis and I  in the Keralan auto rickshaw and I smile.   I now understand that I needed that jolt to the system.  Living a middle class life in Holland (in Northern Europe!) had given me this false sense of entitlement.  A trait I accuse the younger generation of mastering.  Yet, I am just as guilty.
In those 14 days, I learned that one can sleep soundly on a bed without matching bed linens; that a one-burner gas stove can cook just as well as a stainless steel Smeg gas burner; that a hospital in a small town in Southern India is just as good as the hospital in my small town in North Holland. But more importantly,  that the art of healing is not dependent on a setting but rather on the people who heal.
Yes, I will go back to Kerala. Back to Thrissur.  But next time, I will come with an open mind and an open heart. And I shall rejoice! Perhaps that is when I shall truly be restored.

Valerie, a very dear friend, was my guide to Indian cooking. She gave me the courage to try the various spices and pastes, making it all seem a lot easier and allowing me to cook curries for my spicy food-hungry family.
But lentils were something I could never master, until I met Annie. On the one-burner gas stove which we shared with 2 other guests in our cottage in Thrissur, she made the most delicious vegetable curries. This is one of them. 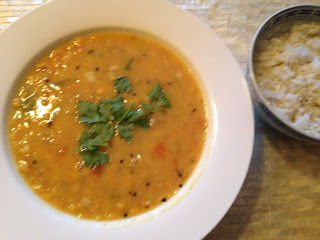 Put all the ingredients together in a pressure cooker.  Allow to boil and pressure cook for 3-5 minutes.
Part 2 :
2 tbsp. oil
¼ tbsp. black mustard seeds
¼ tsp. cumin seeds
2 garlic cloves, chopped finely
Heat the oil and drop the seeds allowing them to pop.  Add the garlic, gently browning the pieces.   Pour in the softened lentils.  Add about ¼ cup water.  Allow to boil, letting all the flavors blend.   Taste and add extra salt if  necessary.
Serve warm, topped with fresh coriander.


Posted by aclutariopatist at 2:05 AM

Oh my, as I read, I was visualizing your adventure and could sense all of your feelings. Louis did so well, I know Greg would have a hard time going to a "local" hospital. I must say, I had to look up Kerala on google to understand where you were, as I was reading.

Thank you for sharing this and the pictures were incredible.

Love from the States,

I read the heading and thought "OMG, no! The crazy couple have gone back there! So, there's still hope. . . .

Carla, it was truly an adventure. I would do it again, Colin! But with a friend or a group of girlfriends. I think Louis would rather stay home.

Alma, you were such a wonderful wife to Louis! I guess even though couples like us often argue, we are tested in times of trouble, for hubby was always there when I was hospitalized. Keep up with your strong spirit Alma. Godbless